There are not words to describe the magnitude of this tragedy.
It is the greatest injustice in history as it effects all of humanity and the earth. This catastrophe exceeds the burning of the Royal Library of Alexandria in the fourth century A.D., which set back the industrial revolution by a thousand years.

STANLEY ALLEN MEYER
This scientific advancement is greater than the discovery of electricity by Benjamin Franklin, greater than the day Edison switched on his Pearl Street generating station's electrical power distribution system changing our world forever. It surpasses the achievements of Nikola Tesla who's patents and theoretical work formed the basis of modern alternating current and helped usher in the second industrial revolution.
This one invention dwarfs all preceding achievements because it undoes all of the evil and destruction and human enslavement, which has resulted from man's past relationship with science and technology. It would have completely eliminated global warming as it relates to the burning of fossil fuels. It would have ended the destruction of pristine environments in the quest for oil, like those in southern Africa, South America, and Alaska. It would have made dirty, dangerous, and inefficient nuclear power even more obsolete and ridiculous than it already is. More energy is required to produce nuclear fuel rods than they produce when a nuclear power plant is in operation. This new technology produces infinitely more power than it uses because it's fuel is water.

Imagine a world where wars fought over oil are no longer necessary. The mass killing of millions of men, women, and children by America in it's quest for oil would no longer be necessary. It would not be necessary to buy expensive gasoline, purchased with your labor and the blood of innocents. An ordinary car converted to run on water would be virtually free to operate except for the cost of mechanically maintaining the car.
This one invention by a gifted soul would have saved our ecosystem and turned our genocidal civilization into a utopia. But tragically and unjustly it is not to be. In order for humanity to climb out of their self imposed pit of pollution and war, the wealthiest among us must overcome their greed and lust for power.
The people who are raping and murdering our planet will not suddenly awaken and realize that water is a far superior fuel source. It is easier and more profitable for them to attack country after country, killing and enslaving the people, and stealing their oil. After all this has been the barbaric behavior of human kind since we first emerged from the caves. 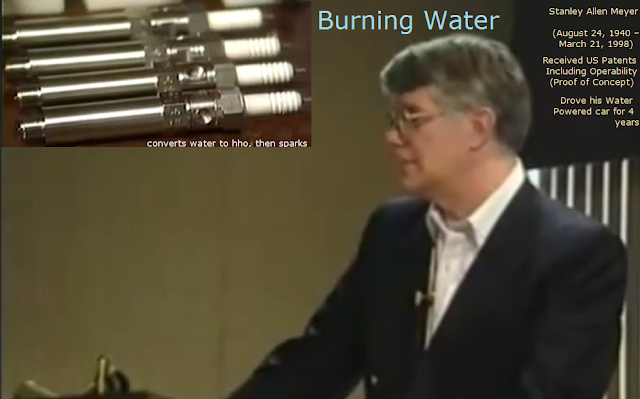 The corporate elite who now hold a noose around the collective neck of humanity tell us to accept our fate and not struggle, the noose will only grow tighter. More people die, our planet's atmosphere heats up and the destroyers of life become richer and more powerful. It can only end with a damaged ecosystem and millions of dead human beings. It will end with melted ice caps, coastlines under water, and weather so cold and erratic that food is extremely difficult to grow, and in America as with the rest of the world, people will starve to death.
This is what awaits you and your children. You have given over your destiny and your planet to corrupt corporations and the people who own them. The ruling elite have decided that the earth's population has become too large and now threatens the quality of life for them and their offspring. Disruption of the eco system will aid them in culling the herd. Of paramount importance is their power and wealth, and the survival of their self serving dynasties. Half of humanity will die so that a privileged few can continue their homicidal reign on earth. For them it is better to rule in a hell of their own making than to live as ordinary men on a peaceful and beautiful planet. 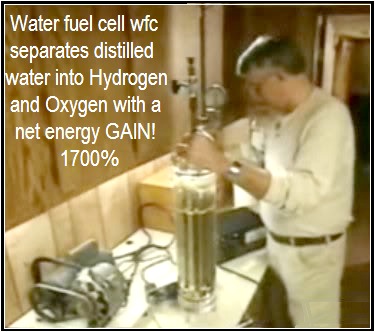 Stan Meyer was our technological savior. He said that America had become too dependent on oil and he wanted to change that. Although he had no formal education having quit high school, Stan Meyer was an inventive genius and his ideas were revolutionary. Using his amazing intellect for good rather than personal gain, he intended to help humanity. He wanted to free us from our enslavement to the oil companies. He wanted to stop global warming. He was bound for the greatest glory that any person has ever known. He would have been the man who shattered humanity's oil dependency forever, ushering in a new dawn of prosperity, freedom, and hope for all except the greedy maniacal few who profit from selling oil and war.
His water powered car was better than an electric car because without numerous solar panels and plenty of sunlight they too must be charged by electricity produced ultimately from fossil fuels. Stan's car was far ahead of General Motors hydrogen car, which simply burned hydrogen stored in a fuel tank which had also been produced with power generated by fossil fuels.

Stan found a way of using only half an amp of electricity to fracture water molecules separating the oxygen and hydrogen on demand. As the hydrogen was produced it was burned creating combustion more powerful than gasoline, and water was the only significant exhaust emission. Stan Meyer's water engine technology could easily have been developed to power planes, ships, trains, and spacecraft, completely eliminating our need for oil.
Stan Meyer said he trusted in angels to protect him, but in March 1998, Stan was poisoned and died in the parking lot of a restaurant in his home town of Grove City, Ohio. According to his brother Steve, the U.S. Government came to Stan's home a week after his murder and confiscated his car, which got 100 miles per gallon of water, and they stole all of his research equipment which he had used to develop the new technology.
Stan had been threatened many times and would not sell out to Arab Oil Corp. Stan said he was offered a billion dollars from an Arab to basically shelve his idea but he said, "No, this technology is for the people."
Stanley Allen Meyer

From the day he proved operability after US Patent Office testing,
all government, opec, and science, became complicit in the biggest crime ever perpetrated against Humanity. We can resolve this NOW, together! His patents are expired...it's in our hands now!